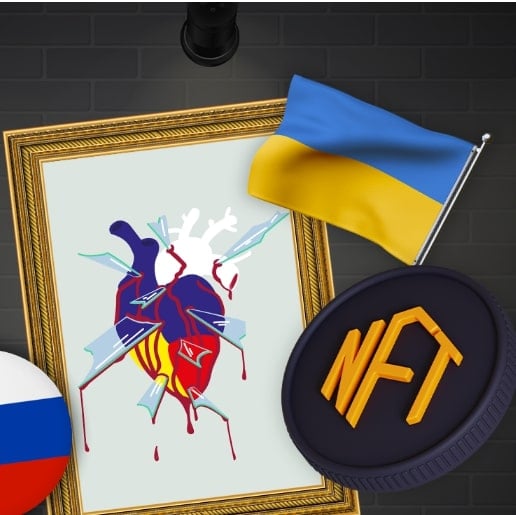 It is already the 20th day of the full-scale Russian invasion of Ukraine. The bloody war has already taken thousands of lives, leveled the entire living blocks, deprived hundreds of thousands of people of their homes.

The eyes of the whole world are turned to the war actions in Ukraine, and thousands of donations in crypto and fiat money arrive in the country's wallets and bank accounts daily. Besides, Ukrainian funds, entrepreneurs, artists, and individuals are working restlessly to provide the Armed Forces and NGOs with everything needed. And charitable NFT collections here play one of the leading roles.

The creation of Ukraine's official NFT drop was announced in early March by the Vice Prime Minister of Ukraine, Mykhailo Fedorov. Primarily, these NFTs were planned to be distributed among those who had made donations to aid Ukraine but the plans were changed in favor of a "museum." The extensive NFT collection will comprise digital arts telling the stories of the Russian invasion taken from tried-and-true sources.

According to Bortnyakov, they want it “to be cool, good-looking, and it takes time.” He also added: “We don’t use this fund to buy weapons at this point. We’re buying night-vision goggles, optics, helmets, bulletproof vests.” All the proceeds from the NFT sales will be forwarded to Ukraine's defense efforts.

The Western media call the Russo-Ukrainian war "the first crypto war," as the global blockchain community has been one of the first to react to the unprecedented criminal intrusion of Russia on Ukrainian lands. Recent reports state that starting from February 24th, about $88 million in crypto was donated to aid the Ukrainian army and charitable NGOs. BAYC, Binance, Wladimir Klitschko and WhIsBe, Holy Water, RELI3F, and many other companies, projects, and artists have already contributed to peace in Ukraine.

Doing good is a sacred duty of each of us. Don't stay aside, help Ukraine win this war for freedom!