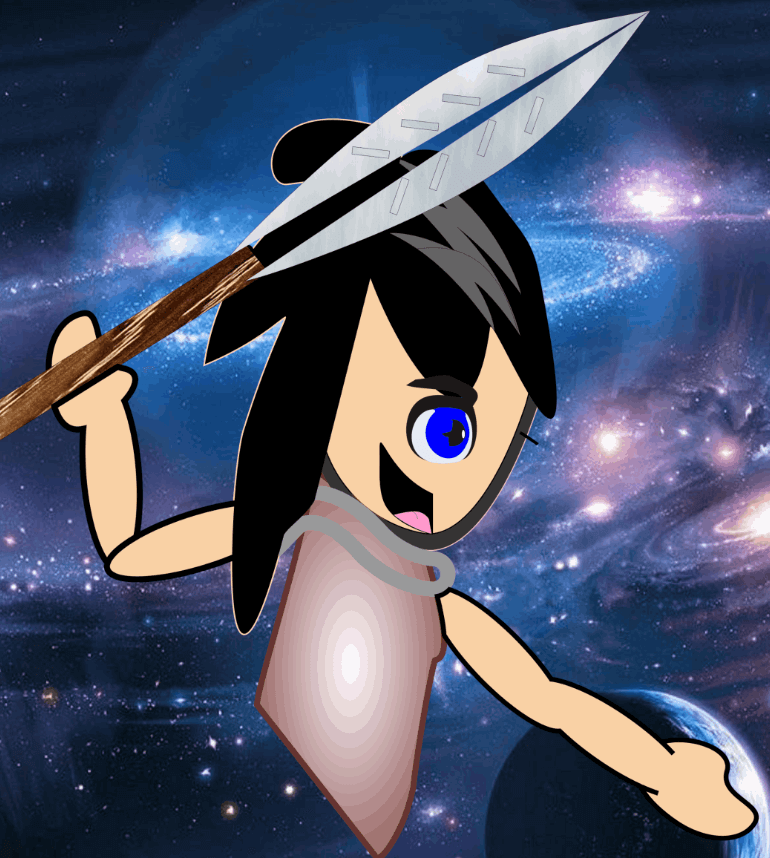 Today we are sitting down with Art K — creator extraordinaire, President of Dreamgineers, MBA.

Art K: Dreamgineers was founded on the principals of creating fun, entertaining and useful art work for our community of dreamers and darers.  Our first venture into the NFT space was birthed from our love of Star Wars, science fiction, fantasy and animation.  That combination of influences, coupled with our desire to create collectible treasures that can be used throughout the web, metaverse and even displayed on a wall propelled us to create The Rubian Galaxy Collection.

Chris: The Rubian Galaxy comprises characters operating within their quadrants. What is the idea of these characters? Do you have a metaverse game launching sometime soon?

Art K: We are planning our Metaverse release in 2023 along with an Android version of the game.  Here is the backstory for The Rubian Galaxy.

The Rubian galaxy has been in turmoil for eons, ever since the merciless Hemi’ri overthrew the Order.  The Hemi’ri are ruthless destroyers of planets and solar systems. Meticulously moving from planet to planet and stripping it of natural resources they leave dust bowls in their wake. Populations of entire planets are forced to flee to safe havens to avoid labor camps and starvation.  The Hemi’ri employ corporations to manage their planetary destruction, the most heinous of which is the MANGUS CORPORATION.

The planet Tammatu is the latest conquest of the Hemi’ri, and the Mangus Corporation has built a mining camp on the outskirts of the Cammpu Territory.  Filled with dust and cactus, the once beautiful planet is in turmoil.  The Mangus Corp has recruited refugees from planets they have savaged to work the mines. And what choice do they have; stay on a dying planet or work for MANGUS.

Tammatu  was once a lush water filled planet.  Its only remaining source of water comes from the Six Peaks of Tammatu.  The waters now run black across the harsh landscape.  The planet contains the rare metal Palmidium, used in fuel cells for nearly every propulsion engine in the galaxy.  Semi underground mining camps are run by the native Manshus, traitors to the Hemi’ri, and their army of drones employed by the Mangus Corporation.  Foreigners looking to make a quick buck come to Tammatu and sign up for 2 to 6 year contracts to mine. Tammatu has two bright yellow moons and two orange suns.  Tammatu is an erstwhile home to six hundred million inhabitants and refugees from the uninhabitable planet Malbu.  The Six Peaks are uninhabitable, inhospitable and inaccessible; they are the galactic home of the Manshus.  Nothing lives on the peaks but the Manshus.  Tammatu is mostly desert thanks to its dual suns, but the Peaks are covered in bitter snows and ice piercing high into the sky away from the planets background radiation. Any who have attempted to scale the peaks have been met with sudden death from destructive winds and -60 F chills.  No one survives the attempt, thus securing safety to the ruthless Manshus.

It is on the forsaken planet Tammatu that a ragtag force of stragglers is trying to hang on and remove the Mangus Corporation and in turn the Hemi’ri.  And they are not alone, other beings that observe the Rubrian Galaxy are taking notice.  One such group are the Pobpa Bep.

The Pobpa Bep are the ethereal guardians of the four quadrants of the Rubrian Galaxy.  Each Pobpa Bep is immortal but cannot travel outside their quadrant.  The Pobpa cannot directly interfere in the affairs of sentient beings in the galaxy. They must convince others to do their bidding, and those that help the Pobpa are given special gifts to help them on their missions.  The Pobpa are not gods, but rather beings with extraordinary powers. Their powers are represented by amulets and jewels.

Camborts are the eyes of the Pobpa Bep.  They are ever vigilant, always watching, waiting for signs of unrest in the galaxy.  Camborts were created by the Pobpa Bep and are entirely loyal to their masters. Camborts are benign, they do not intercede in anything, they are loyal only to the Pobpa Bep.

The Twins of Wahak’ represent the eternal struggle of good over evil.  They are the yin and yang, but both are neither all good nor all bad. They are Interferers – those that insert themselves into the struggles and conflicts of men and women often with unintended results. The Twins can travel through time and space with ease, but they do have a weakness.  The Camborts are able to follow them.

The planet Krieger is home to Renee, a Princess of the Tagapa.  She is fierce and unflinching as she battles the Hemi'ri wherever they are in the galaxy.  Renee never waits for the battle to come to her, she strikes first and fast.  The Pobpa Bep have given her special amulets in her quest to defeat the Hemi'ri.  See if you can find them.  One is the most powerful of all the amulets given by the Pobpa Bep.

There are 28 inhabited planets in the Rubrian Galaxy. They are all supported by their own suns and solar systems.

Pampuin is a planet of vast resources, technologically advanced, a beacon of hope.  Its cities are housed under clear domes and climatically controlled.  The streets and buildings are pristine, and crime and want are unheard of.  But this perfection comes with a hidden price. The planets ruling council is the Hedsan and the inhabitants are the Bello; genetically engineered at birth for the exact skills and aptitude needed to sustain the planet.  Pampuin has a single moon and sun. The Hedsan has total rule over everyone and everything on Pampuin.  Their benevolence may not be all it seems, and their arrogance leaves them to underestimate the brutality and power of the Hemi’ri.

The planet Mal’bu is a wasteland of destruction brought on by endless wars and social unrest caused by corrupt governments. Its climate is a mess, the cities a dystopian nightmare. What is left of its inhabitants are constantly trying to find a way off the rock.

There are fighters against the Hemi’ri throughout the galaxy, one group is led by Renee, the Warrior Princess of Valhataa.  She and her female army have managed to strike back at the Hemi’ri and slow down their assault on the galaxy. But, without more help their cause is in great peril.  At great personal danger the Warriors of Valhataa have positioned themselves as spies in and amongst the planets overtaken by the Hemi’ri.  The Bopba Bep have recruited the Valhattans and given them special tokens of powers to use in their fight against the Hemi’ri.  What they lack in numbers has been made up for with cunning, strength and resolve to restore order to the galaxy.

Chris: How many of the Rubian Galaxy NFT will be released on the metaverse at public minting? What will be the key differentiating characteristics?

Art K: The first characters, the Boppa Bep will be released in a limited run of 5000 unique digital collectibles.  Their key characteristics will be in the vivid and lively colors of their faces, helmets, eyes and nose.

Chris: The Boppa Beps will be the first set of tokens to be released. What will be the release date for the other set of NFTs in the Rubian Galaxy series?

Art K: The second character to be released will be the Hemi’ri.  They represent the evil in the galaxy and will be released in a run of 10,000 characters.  We plan to release it in 2022 probably after all the Boppa Bep have been minted, but we could do it sooner if the community is eager for them.

To learn more about the project and its future, please visit our website or join our Twitter & Opensea. We are looking forward to seeing you!

Chris: Additionally, what will be the price of one Rubian Galaxy NFT? Do you also plan to release more such token collections in the future for the Rubian Galaxy?

Art K: The initial Boppa Bep will have a floor of .02 ETH.  We expect to have random bonus days where we drop the floor on 1 or 2 Boppa Bep down to 0 ETH.

Chris: How have you defined the rare tokens in each of the categories of the Rubian Galaxy tokens? Do you have a rarity reference chart?

Art K: We have a rarity chart and each character has certain features of uniqueness. These will be fully spelled out at the offering.

Chris: Additionally, what are the benefits of owning a Rubian Galaxy NFT? What else can one do with their tokens once they buy the NFT?

Art K: Buying a Boppa Bep is more than owning an avatar or a rare piece of beautiful high resolution art; You are gaining membership access to a community whose benefits and special perks will increase over time. Your Boppa Bep (the first of our Rubian Galaxy characters) can serve as your digital identity, and fling open digital doors for you. Use your identity in our emerging The Rubian Galaxy Game for even more perks and in game powers and in our soon to be expanded Dreamgineers web spaces.

Our membership sites will have monthly bonuses such as giveaways for T-shirts, hats, other apparel.  Enhanced game benefits. Discord community server.

We will have 100 Boppa Bep held back for specials and airdrops for NFT owners.

There will be Artist contests – where community members can design or vote on our game backgrounds,

and of course special powers and enhancements in our Metaverse game and Android game for NFT owners.

Investors can "Rent" their NFT Characters to Players Inside of Our Game — Creator's Interview Disney, Meta Quest, and ILMxLAB Joined Efforts to Bring the Star Wars Universe to the Metaverse BAYC Floor and APE Coin Capitalization Skyrocket After Elon Musk Changes His Twitter PFP to a Collage of Bored Ape NFTs