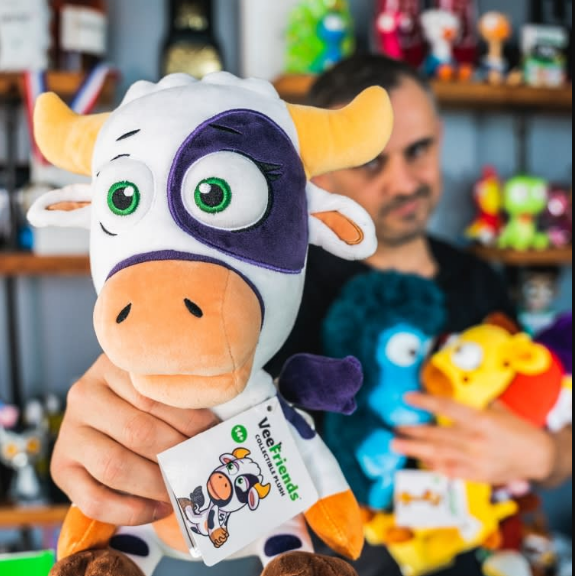 Gary Vaynerchuck's VeeFriends are going IRL with the launch of the first-ever series of collectible toys exclusively via Macy's and Toys "R" US. Each toy comes with a QR code that leads to 3D animated emotional short films and other character songs. The physical transformation comes as part of VeeFriends’ plan to expand its influence beyond the web3 community, engaging new audiences to the project.

The initiative was brought to life after VeeFriends raised $50 million in seed funding led by a16z. After gaining such a hefty backup, Gary Vaynerchuk announced the strategic plan of supporting VeeFriends' intellectual property ecosystem alongside funding the project's creative, technical, and experiential initiatives.

VeeFriends characters were developed from the drawings Gary Vaynerchuk once imagined and brought to life. Currently, there are 283 characters in the VeeFriends ecosystem, six of which were curated by Gary himself to explore the real world. Each character has its own captivating story and boasts bespoke traits.

The collection features plush and vinyl toys brought to life by the London-based entertainment company, Toikido. Currently, everyone willing can preorder the collectibles at a price ranging from $9.99 to $29.99 at Macy’s and Toys "R" US websites, the Macy’s mobile app, at all Toys "R" US at Macy’s stores nationwide, and on the VeeFriends shop for international buyers. The toys will go on sale on October 17th in three formats: plush toys for $24.99 and vinyl figures for $29.99. Moreover, there are VeeFriends Blind Boxes at $9.99, which are not available for preorder.

“This partnership means way more to me than you could ever imagine. The thought that VeeFriends will be in Macy’s and Toys "R" US simultaneously is incredible,” Gary Vaynerchuk, CEO & Creator of VeeFriends commented, adding, “I fondly remember growing up in Edison, New Jersey, walking down these stores’ aisles as a kid. We chose characters that we think embody exciting features for first-time collectors, much like some of the toys I picked up on the shelves of Toys "R" US the first time. I can’t wait to see them in-store and on the shelves – it’s a full circle moment for me and a very big step for the company.”

Of course, the physical launch doesn't go by VeeFriends NFT holders. Being a community-driven project, VeeFriends ecosystem firstly provided the specific NFT holders with a chance to claim a free collectible between October 4th- 18th. Moreover, according to Andy Kraniak, President of VeeFriends, the NFT holders will additionally get priority at the in-store events. The President calls these opportunities another way to connect with the holders demonstrating to them the development of the IP behind their characters.

Don’t hesitate to buy a unique grade-A figure or a stuffed VeeFriends toy for yourself or a web3-savvy friend, as they are totally awesome and allow you to the much-valued Gary Vee’s universe.