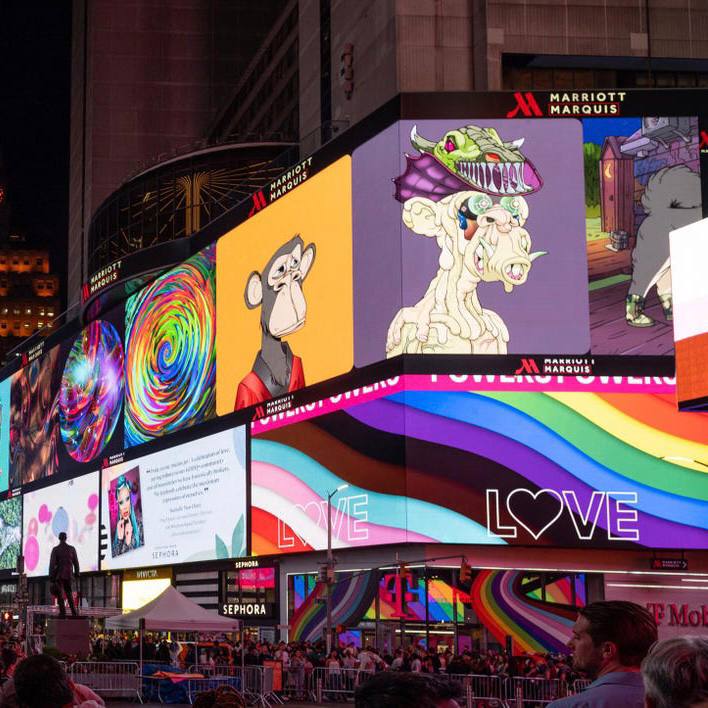 The crypto winter that was outbroken in 2022 has touched upon major cryptocurrencies and produced an impending effect on NFTs. While some collections have gone through a dramatic plunge in market cap, others seem to have even gained in weight.

The major factors to affect the NFT market in favor of some collections are an overwhelming metaverse craze and web3 gamification. Thus, branded NFT wearables and metaverse-compatible avatars have surged in value, making others bite the dust.

Let's have a look at the list of the Top 10 NFT collections that have not only managed to survive but soared in 2022. All the figures you will come across have been carefully processed by the NFT Calendar analysts based on the freshest data from the reputable source, Dapp Radar, at the time of writing these lines.

The pixelated collection of CryptoPunks is the symbol of the whole NFT movement. It features 10K punk-themed 8-bit characters with dozens of unique attributes. The highest-valued CryptoPunk NFT was once sold for an unbeatable $532 million, which made the whole collection soar in price. Currently, CryptoPunks is the most expensive NFT collection, with around $78K floor price and around $785 million of market capitalization so far.

Bored Ape Yacht Club is the flagship NFT project by Yuga Labs composed of 10K NFTs. It debuted in 2021 and is still on everyone’s lips. At the time of the collection's launch, it had no analogs and quickly drew the eyes of the first NFT degens, celebrities, and other influential individuals, which made its price soar.

Currently, the floor price of the BAYC NFTs reaches a whopping $83.78K, while the market cap goes up to $837 million.

Another Yuga Labs' creation, which is an offshoot of the Bored Ape Yacht Club NFT, Mutant Ape Yacht Club, is some sort of 'thank you' reward for BAYC holders. The 20K tremendously designed avatars were created out of Bored Apes, using a Mutant Serum, producing 'melting' ape mutants that had made a tsunami in the NFT realm.

At the time of writing, the floor price of the MAYC collection is $13.96K, while the market capitalization reaches $271.54 million.

Growing leaps and bounds their way to the metaverse gaming domination the iconic web3 company Yuga Labs created the gamified metaverse space Otherside with Otherdeed NFTs. They are the key to claiming land in Otherside. Being an outstanding blend of environment and sediment with valuable resources or power-giving artifacts, Otherdeed NFTs were primarily snapped up in minutes.

Now, the floor price for the Otherdeed NFT at the secondary markets reaches $1K, and the market cap is $100.62 million.

The most influential Japanese anime-inspired NFT project, Azuki is a brainchild of Chiru Labs, composed of four anonymous youths. The 8,700 characterful avatars within the initial Azuki collection sold out in only three minutes, grossing over $29 million.

Currently, the anime-themed NFT collection is known to be one of the centerpieces of the NFT movement, with a $13.78K floor and $137.93 million of market cap.

Another 'thank you' to the BAYC community was a collection of NFT pups within a Bored Ape Kennel Club collection, featuring 10K NFTs. The claiming of the asset was totally free and was accessible only to the BAYC holders. But now, these cute puppies beat the rankings with a $10.39K floor price and $99.89 million of market capitalization.

Pudgy Penguins is a collection of 8,888 NFTs, providing the most possible value to the community of its holders. These cute avatars are the embodiment of good vibes, love, and empathy not only on web3 but in real life.

Clone X - X Takashi Murakami was created by the leading Nike-owned web3 and NFT studio RTFKT in partnership with one of the most praised NFT artists of modernity Takashi Murakami.

The current floor price for the collection reaches $7.19K, while the recent data on the market capitalization shows $139.94 million.

Meebits are 20K unique 3D voxel characters generated from hundreds of supreme traits. Once brought to the NFT world by Larva Labs Inc, the NFT pioneers and founders of CryptoPunks, the collection was then adopted by Yuga Labs and is now actively evolving under new governance.

With $4.37K of a current floor price and $86.64 million capitalization, Meebits can be freely called one of the most successful NFT collections of the present time.

Last but not least is the 10K utility-backed Moonbirds PFPs, generated from hundreds of rarity-powered traits. Only a few days after its launch, Moonbirds had already achieved upwards of 100,000 ETH.

Now, Moonbirds NFTs are available on the secondary market, with the floor price reaching $8.56K and the market cap going up to $85.6 million.

Despite any conditions and changes in the industry, these NFT projects do not leave top positions and are still in great trading demand. Let’s wait and see whether leaders will keep their places in the upcoming year and what other smash hits 2023 will bring to the NFT space!