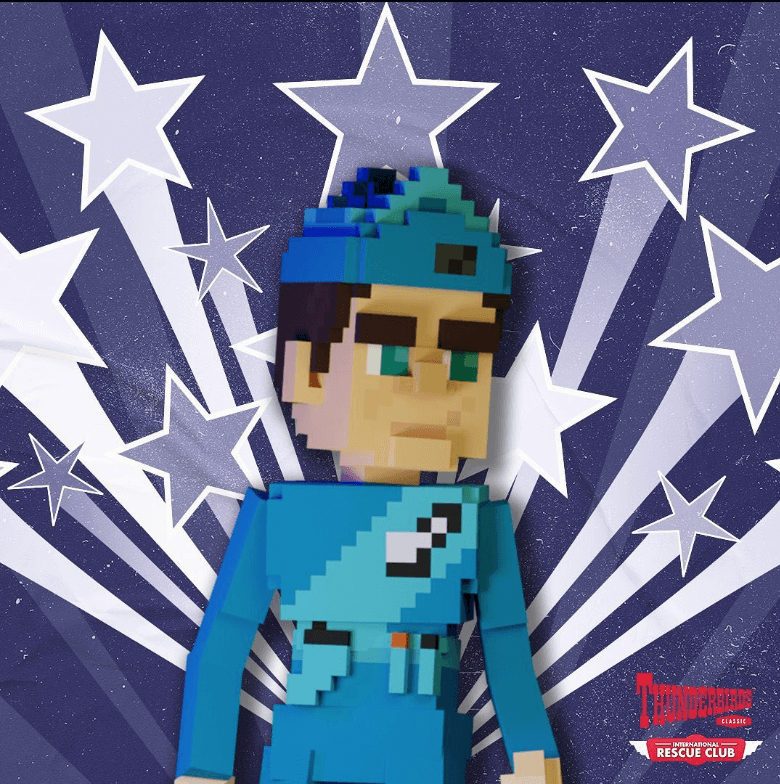 Chris: We would like to know more about the inspiration behind reinventing the classic Thunderbirds TV Show

Warren: Reality+ are committed to continuous innovation.
We’re so inspired by the opportunity Web3 offers to legacy IP and we’re grateful to be an official licensee of ITV and bring Thunderbirds into this new era. We believe that this can inject fresh interest in this intellectual property and create a new global fan base.
We really want to see projects like Thunderbirds lead the way in demonstrating to other traditional media that Web3 can not only offer you a new way to interact with existing fans but also generate new ones. Thunderbirds was part of the cultural make-up of the UK when it originally aired and again twenty years later when the show was rerun on British television. Now it’s able to reach beyond those borders, both in terms of new media outside of television or film, and to a global audience of people excited to engage with classics in a new way.

Chris: Has the team launched any projects before?

Warren: Reality+ has been working with brands for many years and has been a notable business in the Web3 space since the launch of our first AR mobile game with NFT items way back in 2018.

Since then, we’ve been working with brands on other successful projects, including Doctor Who: Worlds Apart, an officially licenced digital trading card game where every card is a tradeable NFT. Doctor Who has been in early access for a year and is an active project launching into beta this year, so we have plenty of experience working with both big brands and a Web3 native audience. Our first set of tokens for the game were launched in 2019 for $250 and now sell for $1000 on our marketplace.

Chris: The whitelisted members are being air dropped free mint passes, what is a mint pass?

Warren: The mint pass is an exclusive membership token.

The exclusive benefits include early access to Web3 content. We’ll be utilising unique areas of the customer journey to drive interaction and engagement beyond our first drop on September 30th. Notably mint pass holders are also able to mint on our first drop a day earlier, on September 29th. You won’t burn your mint pass when you mint either – it’s a long term hold that will have utility as we ramp up this project from the generative launch.

Chris: What makes your project unique amongst the many NFT collections out there and what is important for us to know about the Roadmap?

Warren: Collectors are savvier than ever and looking for projects with a long-term vision. Our roadmap for this project, just like our other projects, is exactly that. Our first drop is important to us and the collectors getting on this early drop are the ones who are going to benefit the most, just like what we’ve seen with our tokens on our other games.

Reality+ have been in the Web3 space for years and have built a full UK studio built on gamification, user interaction, vision, and leadership. What that means in practice is an experienced team with financial backing to create something amazing not only for our first drop but also in the long term. Investors into Thunderbirds will be part of an unparalleled user journey which delivers on its commitment.

Chris: In the trailer you mentioned rescue missions, can you elaborate on this please?

Warren: 20% of the money raised in the primary sale and secondary market for Thunderbirds: International Rescue Club goes directly to charity. That’s why we’re a rescue club! Rescue missions will be recognised as real work initiatives. It’s important for us to continue the legacy of Thunderbirds, a show about a fictional rescue organisation. Web3 helps us take those fictional, sci-fi rescues that the show is all about and help out real rescue organisations and charities through the power of NFTs and community.

We’ve already identified an animal charity called Dobrich Dog Rescue in Bulgaria that we’re working with. Secondary sales of the mint pass have enabled the charity to start building extra enclosures and working towards a new licence that allows them to rehome dogs easier within the EU.  That’s why you see the dogs in the trailer. That’s just the first step though. We’re also focused on enabling all our community to raise awareness of rescue Missions which are important to them, so that we can collaborate in a DAO / voting capacity and support more missions at a grassroots level. Also, don't forget to join our Discord and Twitter. It is the best way to stay informed on news and announcements.

Chris: What made you decide to partner with the Sandbox?

Warren: We’re excited to enhance the user experience by working with The Sandbox. To us, the Sandbox represents a realisation of the Metaverse that’s already live, popular and fun. It was an obvious choice for bringing Thunderbirds to life. Their team are very helpful and always available and willing to assist in any technical questions.

They have also recognised Reality+ as an official partner to build and activate with them in their space. That’s important because it means we can hit the ground running when it comes to development of further metaverse experiences and deliver new stuff to our audience faster.