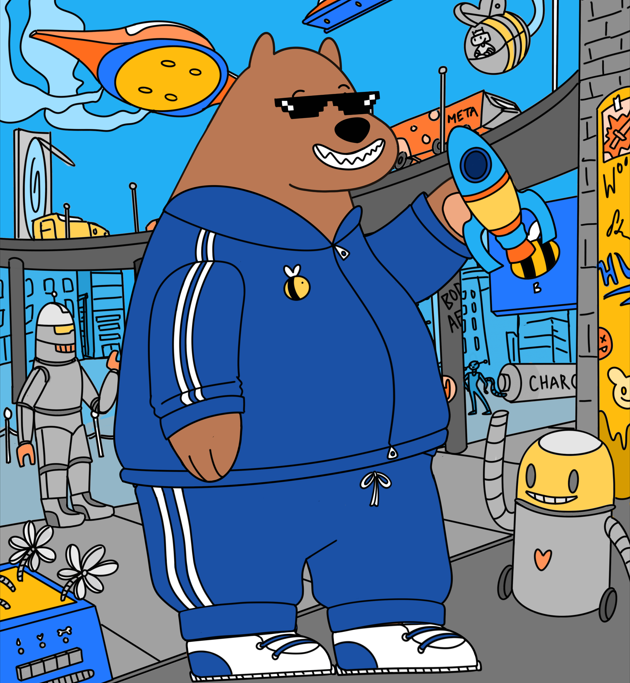 Chris: To kick off, some background info on you and your team would be great! Where are you guys from, and how long have you been in the crypto space for?

VAF Team: The core VAF team is Jaz the lead creator, Nestor the co-creator and Stacys the artist with many others helping along the way like 0xZoom with smart contracts and WiseCloud and Nate with marketing. All three members of the core team have been full NFT degens since February 2021. We are all from North America originally and live all over America now.

Chris: Can you tell the story of how you connected with the artist?

VAF Team: Sure, Nestor and I were collectors of the Hunnys project and we're just fans of Stacys and her artwork. She was a natural choice to reach out to for developing this project. She is a master with color as you can see in both Hunnys and now with Vinny & Frens.

Chris: You guys are creating " a fun twist on classic characters from our childhood" - any interesting story behind it?

VAF Team: Absolutely! Vinny & Frens came to be after jaz saw the news of the original book, "Winnie-the-Pooh" entering the public domain in early January 2022. It quickly became apparent that there was an opportunity to 'recast' these characters into a web3 world. Winnie-the-Pooh is a globally iconic character and the personalities of all of his friends in the original book are preserved in Vinny & Frens, we just updated them to have an original look and feel and be focused on web3 just like the founders of Vinny & Frens are. Speaking of their original look and feel when we started out we were not sure which creative direction to go in. Stacys created several different styles to consider to include old-timey, fantasy, video game style and cartoon. We settled on the cartoon style since we really liked the way the colors popped, some might say it shares some semblance to the Adventure Time animated TV series.

Chris: So the characters are all adaptations of the originals. Can you give us some background on each one?

VAF Team: Please go here to get biographies on each of the VAF characters The relationship between the original book and Vinny is Frens is as follows:

• Winnie-the-Pooh as Vinny the Blockchain Bear
• Christopher Robin as Bernadette Bluebird
• Piglet as Hoggy
• Rabbit as Hoppy
• Eeyore as Igor
• Owl as Dr. Hoot
• Kanga & Roo as Walla & B

Chris: So what then are the primary differences between the WtP characters and Vinny and Frens?

VAF Team: The primary differences are their names and how they look and the world they inhabit. Everything else is quite similar, we like to say they are cousins.

Chris: How'd you come up with the supply count of 7,799? Is there a story behind that number?

VAF Team: We have seven characters total but we may or may not have a surprise 8th character. We wanted the number to be a multiple of 7 + 1 and be a nice number, hence 7799.

Chris: On a technical note, what is the purchase process of Vinny and Frens?

VAF Team: We have worked hard to create a seamless purchasing experience. Once you have your ethereum on a web3 wallet, navigate to our website and click the MINT button. From there you can connect your wallet (we accept a large variety) and proceed to mint. We also have worked hard on providing an optimized ERC721A contract so gas should be very reasonable, even if you decide up to the maximum number per transaction of 42 NFTs.

Chris: What is your primary goal for the initial launch?

Vinny: More than anything we just want to have a successful process with no issues and lots of people minting and excited about the artwork!

Chris: What are the legal rights for the holders of a Vinny & Frens NFT?

VAF Team: In general we are not granting any commercial rights to token holders. Our business model is built around developing the IP so the primary benefit for token holders should be simply enjoying the artwork and waiting to claim the physical book in about six months after a successful launch.

Chris: Can you elaborate more on your roadmap milestones?

VAF Team: The first and foremost item should be to just enjoy the fun artwork by Stacys. There are seven characters with distinct personalities so we think there is a fren for everyone. Then the second item would be to hold onto your NFT to be part of the snapshot in approximately 6 months for the physical redeemable book since the most important milestone is the completion of the Vinny & Frens book. This book will serve as an informal sequel to the original Winnie-the-Pooh book AND thoroughly introduce all the characters and the world in which they live, namely Metaverse City. However there are many other items on our roadmap that we will roll out along the way. For starters we will get to work on a web3 merch shop. The goal of our shop is to be web3 native so you can pay in ethereum, receive a NFT for your purchase that you can then use to redeem for the physical good. Speaking of goods, we want to have plushies for all the characters as soon as possible but certainly would start with the tried and true stickers, magnets, pins, hats and shirts. We also will probably experiment with some other NFT book related ideas, think choose-your-own-adventure books meets Madlibs meets Loot. Also, don't forget to join our Discord and Twitter. It is the best way to stay informed on news and announcements.

Chris: What sets you apart from other NFT projects out there?

VAF Team: We are born from one of the most recognizable characters ever created, Winnie-the-Pooh. We are set on day one to build out the storytelling aspect of all these characters. We have an experienced web3 artist and the founders have been in web3 from the inception having been involved in the formation of multiple DAOs.

Chris: What existing NFT project would you say Vinny & Frens is most similar to?

VAF Team: That is an easy one, for sure Stoner Cats created by Mila Kunis and her frens has a lot of parallels. Both have 6 animal characters and 1 human character. Both projects have full body NFTs. Both projects are attempting to build out the world of their respective characters. With Stoner Cats they are doing this with their animated show and for Vinny & Frens it is with a book (at least initially). We really see Vinny as a character that we can build a world and web3 stories around.

Chris: If there is one thing you want to achieve with this project, what would that be?

VAF Team: I think to be able to complete the book would be amazing, I think we have an opportunity to take a real classic and reinvent it for the web3 crowd.

Chris: Do you have metaverse land acquisition interest to coincide with Metaverse City?

VAF Team: Yes possibly. It is still too early to say how we might integrate our project into the metaverse but definitely something we are exploring. We like the ease of building in Voxels for example but any decision on metaverse is still very TBD.

Chris: What's been the most unexpected part of this project y'all have come across so far?

Chris: What's the target age bracket for the book? Is it also for kids like the original or is this more adult oriented?

VAF Team: It should appeal to a wide audience. The goal is to tell web3 stories that educate newcomers while also telling tales that degens can relate to.