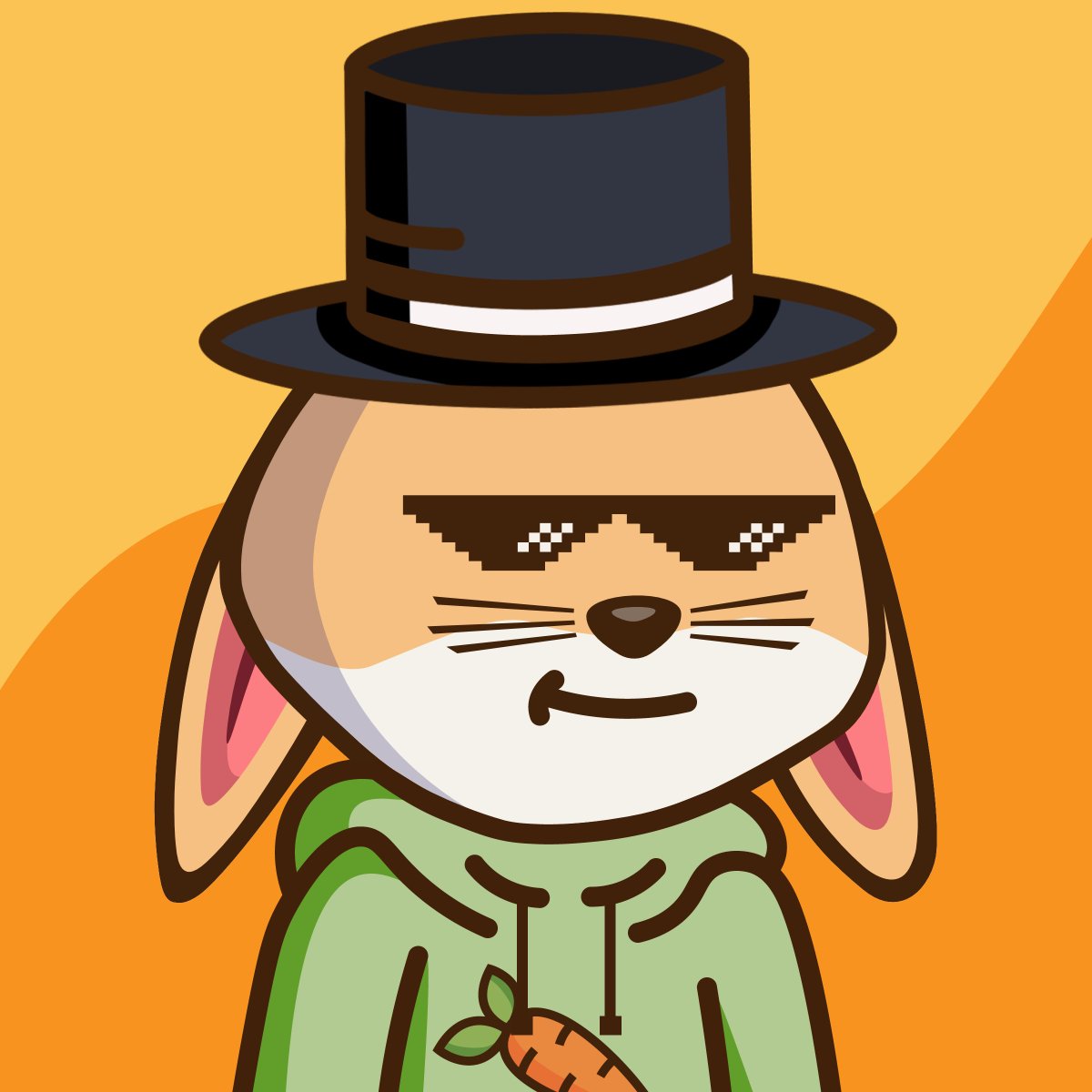 Andrew: Hi, I’m Andrew, also known as HUBHUB. I started Boss Bunnies NFT with my wife, known as WUBWUB, at the end of 2021 with a hope to bring something collectible and original to the NFT community. We’re both young, working professionals in our 20s in the finance and accounting industry, but when it comes to our hobbies and passions, art and coding are at the top of the list. That’s what sparked our desire to contribute to the NFT space in the first place. Upon beginning Boss Bunnies, we’ve both had to wear many hats including initial concepting, character design, website design, backend specifications, and marketing/promotion. It’s truly been a labor of love and we do this all on our dining table alongside our two fur babies.

Chris: About 10,000 Boss Bunnies are going to be in the NFT marketplace very soon. What is your concept behind the NFT? Why Boss Bunnies?

Andrew: On the art-side-of-things, the crux of it was that we just wanted to make a Boss Lookin’ Bunny. When we were looking at all the projects out there, there were a ton of apes, dogs, cats, etc. but it seemed like bunnies were underrepresented! Bunnies are very iconic animals because of their ears, but those very ears also create limitations in headwear accessories. I guess that’s why other creators shied away from having a bunny as a base character, but we were intrigued by this challenge! When it came down to character design, we spent months trying to perfect every single detail from the head shape, shoulder angling, skin shade, whiskers, down to the outline thickness! We wanted people to love Boss Bunnies so we put our 200% into it. The defining characteristics of our Boss Bunnies are their sharp pointed whiskers, triangle nose, and floppy ears.

On the token utility side of things, we wanted to have each Boss Bunnies NFT be a membership token into building something great as a community together! We’re reserving 20% of ETH proceeds to go towards community building and future development efforts.

One of the reasons why we haven’t built a game or established any other systems yet unlike other projects is because we truly want this to be a clean slate. Ultimately, time, funds, and effort are all limited, and we want to be able to optimize use of all of those things towards development ideas that have manifested after we’ve had a chance to hear from the community.

Chris: I see that your Boss Bunnies have point system where each NFT has between 4 – 8 points. What is this all about?

Andrew: When we set out to create this project, there were certain feature goals that we set to make sure that the project was cohesive in its entirety. One of these goals was that we wanted the collection to have visually identifiable rarity scales. In comes our rarity system!

There are 4 different trait categories that make a Boss Bunnies NFT: head, body, eyes, and mouth. Each of these trait categories have tier 1 traits (worth 1 point each) and tier 2 traits (worth 2 points each). After tallying up the points of all the traits that make a Boss Bunnies NFT, you get a sum between 4 to 8 which is also denoted by these names:

In the collection there will only be certain numbers of each tier created and each category is given its distinct colored background so it’s easy to tell what you’ve got. While all Boss Bunnies are very cool, the rarity simply reflects how many of those bunnies are generated.

The points may be used for something in the future, but for that, the community will have to wait and see what the future of the project has in store!

Chris: What is the cost of 1 Boss Bunnies NFT? How much will be the gas?

The cost of 1 Boss Bunnies NFT is 0.1313 ETH + gas fees. We decided on this value because 1313 makes “BB” for Boss Bunnies and, for us, that’s where it all began. As for the gas fees, this will depend on the usage of the Ethereum Network at any given moment and is subject to fluctuation.

On our end, however, to minimize the gas fees, we’ve done a ton of research and testing to make sure that there is as little stored on-chain as possible and that the code is written efficiently.

Chris: Once I buy my NFT, what can I do with my Boss Bunny? Where can I find the terms of use for the Boss Bunny NFT owners?

You can use your Boss Bunnies NFT as your profile picture on social media, print your Bunny on a t-shirt, put it on a mug and give it to your best friend, or even print some one-of-a-kind wall art for your room! Community members who purchase a Boss Bunnies NFT are free to do what they want with their Boss Bunnies, as long as it doesn’t violate any rights and restrictions in our Terms of Use. You can find it on our website.

In the long term, our hope is for Boss Bunnies to become a community driven project where Boss Bunnies NFT holders decide where the project goes. Token holders will also be able to vote on the future direction of Boss Bunnies through our Snapshot which will be released after minting is complete.

Boss Bunnies Beats is something we created for our community to enjoy alongside their Boss Bunnies NFTs. They are original soundtracks created exclusively for our project with immersive animated backgrounds to give our audience a more wholistic experience of the Bunniverse (aka the world our Boss Bunnies came from). We already have EDM and LoFi productions ready to share with the community and they will be available on our YouTube channel on minting day and once we’re 50% minted.

Chris: There is a merchandise store as well? How can one buy Boss Bunnies exclusive merchandise?

Yes! We have a Boss Bunnies Bonfire store set up with t-shirts, hoodies, caps, masks, mugs, and much more! The store will be open to everyone once we are 25% minted.

Chris: What have you guys done to ensure that the backend is secure so that Boss Bunnies NFT images and metadata will not be lost or altered?

This was something we poured a lot of time and effort into because, unfortunately, there are some disingenuous projects out there that rug pull their community!

We’ve designed everything to put the minds of our community members at ease:

1) Individual image integrity – we made each Boss Bunnies NFT’s metadata store the image-hash using the SHA-256 algorithm. This means that if even one pixel is changed in the image, the owner would be able to detect it.

2) Collection-wide image integrity – we created a final proof provenance hash which is stored in the Boss Bunnies Smart Contract. This means that if even one pixel is changed in ANY image within the entire collection, it will be able to be detected.

3) Decentralized & Immutable File Storage – we used the IPFS standard to store metadata and images. This means that the images cannot be tampered with or manipulated, even by us.

4) Availability of Data – we also used Pinata to pin the data as an IPFS node so that a node is always available for data to be pulled from. This means that Boss Bunnies images and metadata will never go dark.

Even though this all sounds complex, we definitely couldn’t have gotten here just on our own!

“If [we] have seen further, it is by standing on the shoulders of giants.”

Now, that is to say, we could only be here because of the amazing NFT community, the advancement of all the underlying technology (including ethereum, blockchain, etc.), the many projects that have come before (like the Cool Cats, Bored Ape Yacht Club, CryptoPunks, etc.), and all those who are supporting us.

We are NOT affiliated with any of the aforementioned projects, but we tip our hats off to them in a gesture of thanks as they bravely paved the way.

Boss Bunnies are so much more than a digital NFT project. We have hopes to build Boss Bunnies into an entire ecosystem of community driven involvement, creative utility, rewards, philanthropy, and more! Minting is only the first step in our story, Boss Bunnies holders will have member-only accesses and perks, and exclusive involvement to future expansions. You can join our social (Twitter and Discord ) so as not to miss new updates. The future is looking Boss!

We Chose to support International Animal Rescue, they Rehabilitate and Release Animals back into the Wild Decentralized Metaverse NFT Chess Tournament Game on the Ethereum Blockchain — Creator's Interview We are Planning to Host our first yearly Private Event in one of the Beach clubs in Bali — Founder's Interview