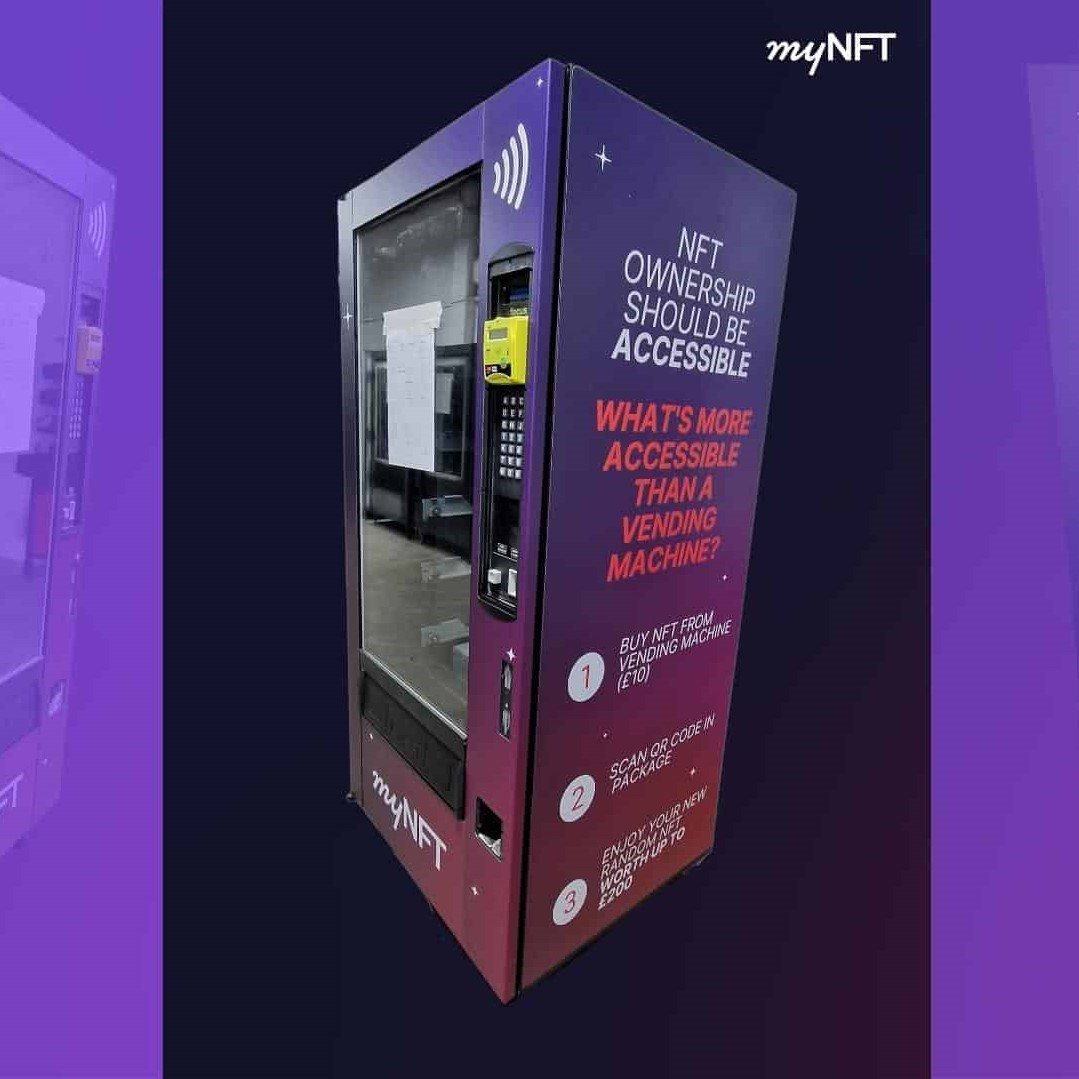 Although blockchain technologies have long been rooted deeply into the modern way of life, business, and entertainment, lots of people still have no idea what web3 is. Being one of the major branches of blockchain, NFTs are also shrouded in mystery. That's why minting non-fungible tokens is believed to be challenging, as it requires special knowledge and skills.

Thus, to debunk the myth that collecting NFTs is a tricky process, the multichain NFT trading platform myNFT has rolled out the first vending machine in Europe. The news has arrived foreseeing the upcoming NFT.London event by NFT.NYC. Thus, myNFT installed its brand-new physical vending machine right outside the Queen Elizabeth II Centre in Westminster, where the NFT event would be running from November 3rd - 5th.

The NFT vending machine is now located in a high-traffic location, offering passers-by a seamless pass to the captivating world of NFT collecting. Thus, even non-crypto users will be able to buy an NFT for about $10 and benefit from getting a random NFT worth up to $230 just for free. What's more, the initiative bears a charitable cause as all the funds raised will be donated to the projects' booster Giveth and the Marvellous Children’s Charity fund.

While most newcomers to web3 fear the challenges connected with NFT purchases like searching for the best loyal project, creating a wallet, etc., myNFT has done its best to make the entrance to the realm smooth, risk-free, and inspiring. The tokens are available in blind packs, containing a scannable QR code. Upon scanning it, the collectors-to-be are directed to the myNFT account free signup page. After the registration, the user acquires a digital wallet where their NFT asset will arrive.

On top of that, the NFT purchase via the physical vending machine requires no crypto, being compatible with most of the currently used contactless payment methods, including Apple Pay, Google Pay, and others.

Becoming holders of myNFT’s inaugural NFT art collection, the newcomers will be able to learn more about the assets and try themselves as traders at myNFT’s user-friendly marketplace.

“There is so much potential in the NFT market and it’s such a shame to see some of that go to waste when possible new entrants are put off getting involved by various unnecessary and complicated barriers. From gas fees, gatekeeping knowledge, to having to set up a complicated digital wallet and more, great opportunities are being denied and squandered to newcomers,” Hugo McDonaugh, co-founder of myNFT.

Interestingly, the vending machine format is well-known and loved by Londoners, as the first tool was developed in England, in the early 1880s. The world's first vending machine was aimed at dispensing postcards in a prompt, automatic way.

Today, about one and a half centuries after the vending machine principle was reinvented in a new, innovative way. While the UK today is far from being on the crest of the global NFT wave, the new, seamless way of entering web3 will definitely attract multiple new users into the realm.

“We’re determined to turn NFTs into an everyday activity for everyone and break it out of its current clique. The best way for the sector to grow is through popular involvement, and we’re only going to achieve that by breaking down barriers,” McDonaugh added.

Currently, there's only one vending machine by myNFT but there will be more to arrive soon.

Would you purchase an NFT using a vending machine, or maybe you have already done so? Share your thoughts and experiences on our socials!