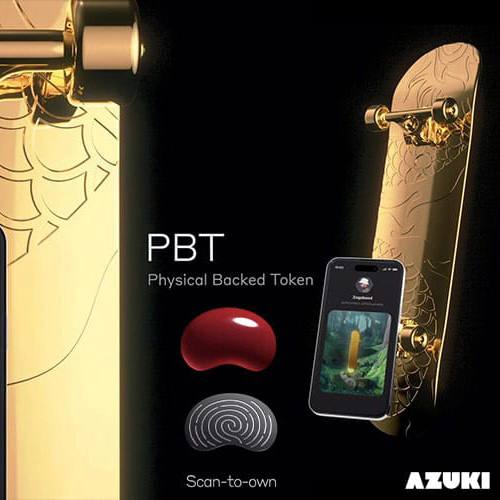 Japanese anime-themed NFT project Azuki has announced the launch of the Physical Backed Token (PBT). The news arrived via Azuki's tweet, telling that it’s going to be "an open source token standard tying a physical item to a digital token on the Ethereum blockchain." So, the endeavor aims to link real-life things with NFTs, enabling on-chain ownership of IRL assets.

For the first implementation of the Physical Backed Token, the BEAN Chip will be used. This is a physical cryptographic chip that self-generates an asymmetric key pair. This powerful combination of the BEAN Chip and the PBT brings a so-called ‘scan to own’ feature that makes it possible to tie physical items to digital tokens on-chain without a centralized server.

The thing is that the scan-to-own mechanism will enable the decentralized transfer of the item from the previous owner to the new owner. Using this technology, everyone will be able to freely authenticate, verify and build experiences with no other entity involved. The PBT comes as the best solution to overcome the gap between digital and physical with decentralized authentication.

The short video in the above-mentioned tweet also shows an example of tying a golden skateboard to a BEAN Chip. All in all, on October 21st, Azuki is launching nine golden skateboards. These are going to be the first physical products fully authenticated on-chain.

As Azuki's official Twitter post reads: “Digital tokens are currently used to provide access to physical drops. And now with PBTs, we’re unlocking the use of physical goods to create digital experiences. A new generation of storytelling and experiences begins today.” Thus, the new solution comes as a big contrast to the present market products, offering collectors access to digital drops.

Currently, Azuki is at the forefront, allowing holders to the immersive experiences both in the physical and digital worlds, alongside enabling them to trade or stake original assets or participate in IRL quests. This enables both brands and individuals to use the PBT to reimagine the storyline of their projects, with much greater opportunities to be soon delivered by the Azuki project.