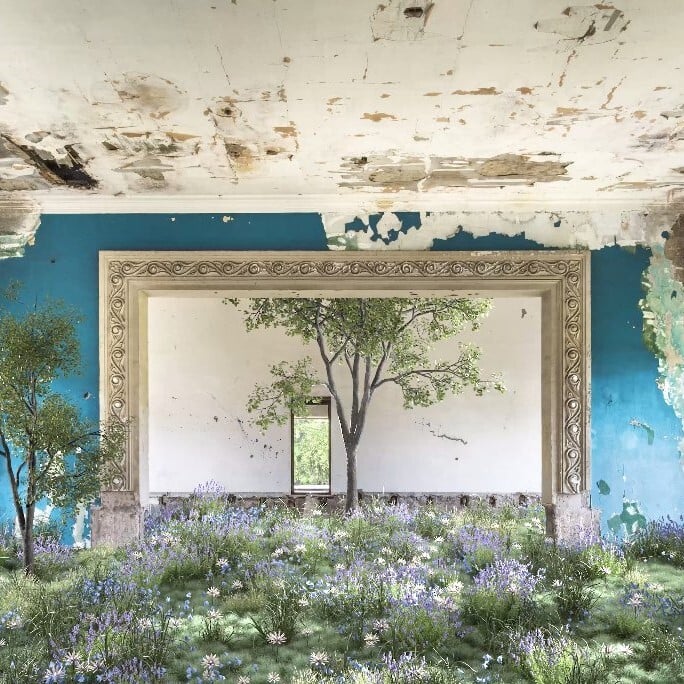 The genius actor Jim Carrey has been waiting quite a long time before getting into NFTs. Finally, he has entered the realm by purchasing an NFT titled Devotion for a whopping 20 ETH. The non-fungible piece belongs to a series of 13 artworks by artists Ryan Koopmans and Alice Wexell dubbed ‘The Wild Within’. The name of the collection is meaningful as it showcases abandoned Soviet Union buildings in time reclaimed by greenery.

As for Carrey's Devotion, it is an image of a semi-ruined USSR-built sanatorium in Georgia in a picturesque place, Tskaltubo resort, once a popular therapeutic destination due to its mineral-rich waters. The building itself has fallen in disrepair long ago — peeling paint, cracks on the walls, empty eye holes in windows. But nature has filled the emptiness with green parts, flowers, and even trees.

Koopmans and Wexell have traveled much during the last couple of years taking pictures of buildings recaptured by nature in post-Soviet countries. To breathe life into them as NFTs, the artists digitally transformed the footage, adding sound by Eric Thome and motion to empty spaces.

Returning to Jim Carey, he has probably been totally sucked into the realm, as today, June 9th, he is to sell his own inaugural NFT piece dubbed SunShower via the SuperRare marketplace. Once a portrait, the picture was redesigned to become an animated non-fungible token, not without Jim Carrey's creative genius touch. Moreover, the SunShower is accompanied by the actor's voice and uplifting philosophy.

The NFT is being auctioned off, starting from June 9th, 3 pm EST, with a minimum bid of only $1! The artwork was designed in partnership with filmmaker David Bushell. A lump of proceeds will go to fund some American NGO.

While Jim Carrey is only starting to pave his way in the ever-expanding NFT realm, we shall definitely wait for some new projects by one of the most outstanding personalities of all time in the shortest possible terms.