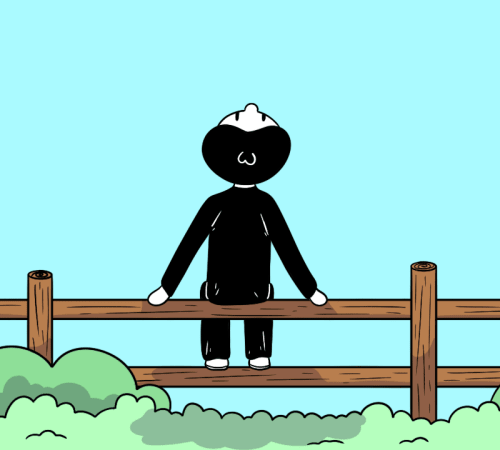 After a long and tiresome walk, Koko arrives in a place full of greenery. After some time discovering this newly found place he notices the overcast shadows on the ground move surprisingly fast. Koko looks up to see that there’s not only clouds above him but a school of jellyfish swimming through the sky. Stunned by this magical view, he takes a seat to fully take in this special occurrence. He decides to follow wherever the jellyfish are swimming to.

Tired from following the jellyfish who didn’t actually seem to go anywhere specific, Koko lies down in a meadow. He should get some sleep before continuing. After a short while he is abruptly woken up by a pack of manta rays. They swim across the meadow, he must be in their territory. Their wing-like fins move up and down in a majestic manner, moving the grass across the entire meadow as if a breeze is blowing through it.

Koko failed to keep up with the manta rays and kept walking the way they were swimming. A betta fish suddenly falls down from the sky, stopping just centimeters away from Koko. She stares at him and Koko stares back in shock. Her scales and fins hold at least a hundred colors, maybe she can help Koko to get back his color. The betta fish moves closer, she seems friendly. Koko slowly approaches her and reaches out. She speaks. “My colors are mine, everyone has their own. You won’t find yours taking it from others. Seek further”.

The ground beneath Koko trembles, is it an earthquake!? He gets lifted into the sky. Unsure what’s going on Koko starts running, but there is no place closeby he hadn’t been to. He walks up to a higher place and notices the ground he was standing on had been on the back of a gigantic humpback whale this entire time. The whale emits a soothing sound that relaxes Koko. He is no longer afraid. He sits down and tries to enjoy the journey.