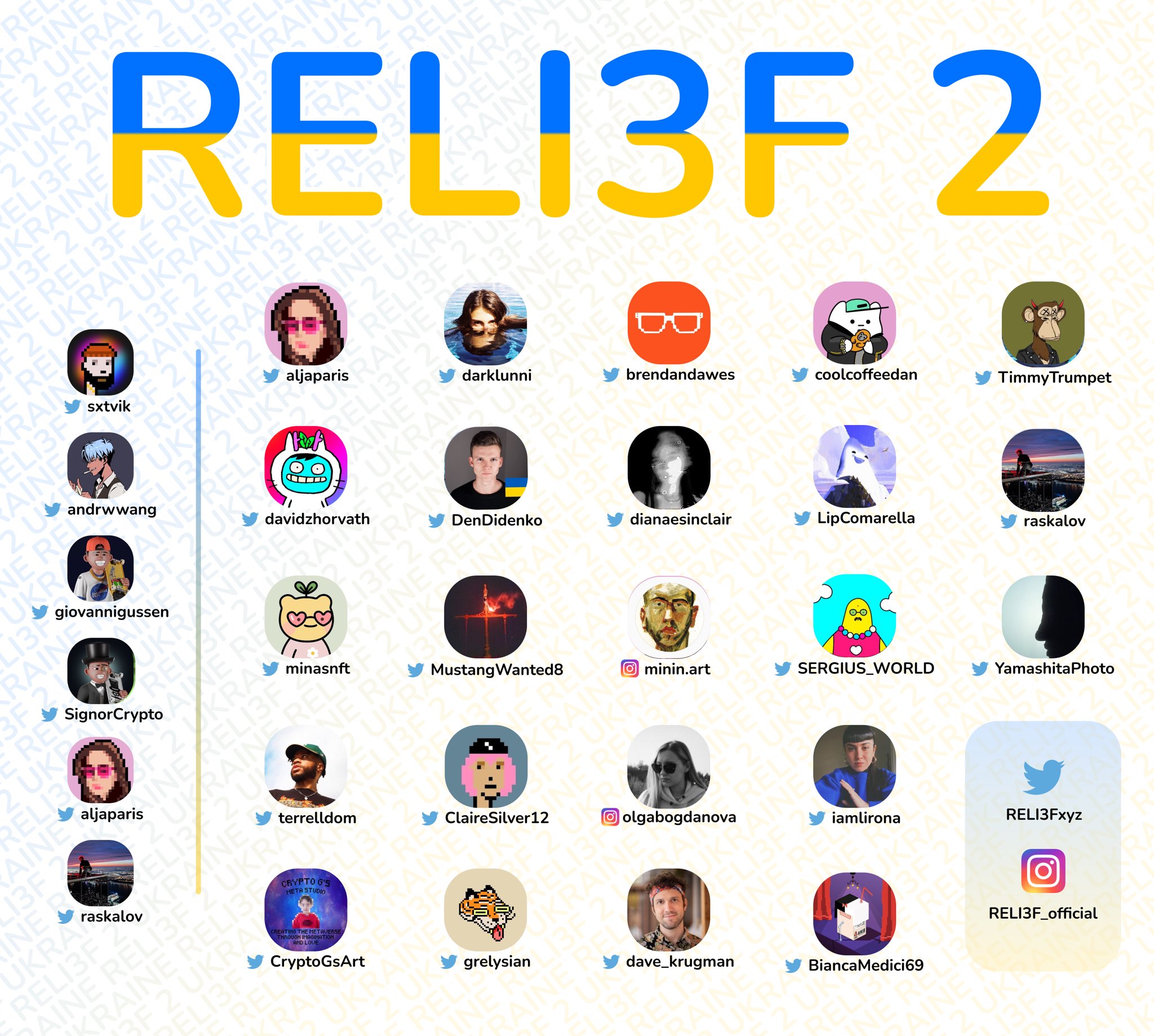 The major fundraising web3 project Reli3f is the best example of how socially significant NFTs can be. Founded back in February right after the Russian troops crossed the Ukrainian borders for war, the project has managed to raise a whopping $1.5 million so far.

Reli3f is the brainchild of the group of web3 entrepreneurs – Satvik Sethi, Andrew Wang, Giovanni Gussen, Aleksandra Artamonovskaja, Raskalov, and developer SignorCrypto. The team of founders has managed to reach out to the world's creative community and draw the attention of thousands of people to the war in Ukraine. Thus, 62 renowned artists donated their non-fungible art pieces to the Reli3f project for the first drop.

Thus, the first collection by Reli3f has managed to raise 739 ETH on OpenSea with a floor price of only 0.006 ETH. The funds from the NFTs sold were distributed among several NGOs: Razom for Ukraine, Serhiy Prytula Foundation, Outright Action International, and Web3 For Africans in Ukraine.

According to Satvik Sethi, only five artists featured in the debut collection chose to keep their revenue royalties. But all those funds were spent to aid their families in Ukraine or help themselves in a hard time of war.

While the first drop turned out to be wave-making, the team joined efforts for the second collection. The second drop was launched in April, raising 86 ETH or about $260,000 during the official mint. Since April 14th it has also traded an additional 21 ETH on OpenSea at the time of writing. Drop 2 featured Reli3f's representative Aleksandra Artamonovskaja, Coolman Universe founder Danny Casale, renowned musician Bianca ’de Medici, and many other outstanding personalities.

Drop 2 turned out to be very diverse, including a piece of generative algorithm based on the artist’s unique hash seed by Gavin Li in his Motherland work. There were also photographs from the Kyiv Maidan Revolution of 2014, as well as thematically intricate wimmelbilderbuch.

"Tons of artists that were reaching out to us saying ‘why didn’t you ask us to be a part of this, and we’d love to help,’” Sethi commented on the first Reli3f drop. He also detailed that Drop 2 has been “a month in the making.”

For now, the Reli3f founders have not commented on the possibility of Drop 3. But looking at how successful both drops turned out to be, the forthcoming Drop 3 is quite possible.